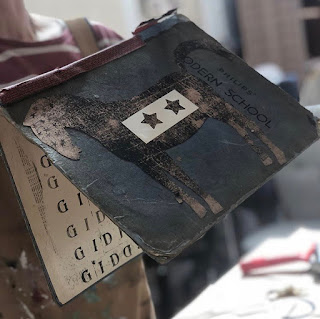 After I made my customised book cover at the fabulous Lisa Stickley workshop at Hope & Elvis, a little story began to formulate in my head...
(Thanks Louise from Hope & Elvis for taking this photo.)

This collaged lady is hidden inside the book... 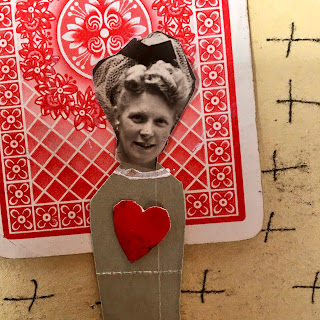 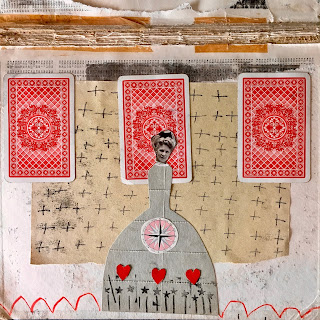 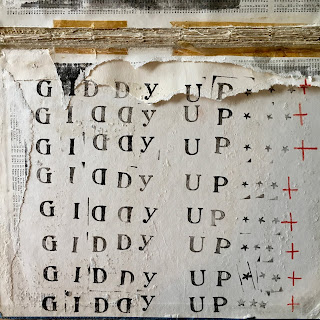 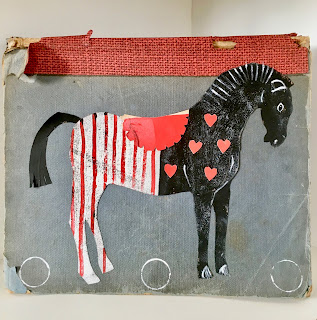 On one side of the book there is the circus horse, and on the other side is his 'shadow'.
The elements of this little piece had no forward planning, and evolved because of the beautiful materials available in the Hope & Elvis studio and the inspirational techniques and encouragement given by Lisa Stickley. 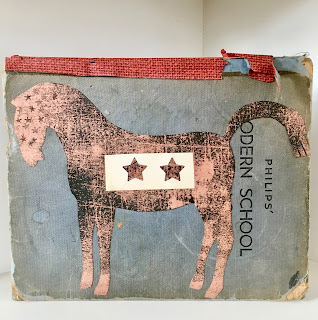 There was once a magical circus that travelled far and wide.
The performers would amaze the audiences with their skill and daring.
One night, Miss Aurora, the horse riding ballerina, fell in love with a young farm-hand in the audience.
They would meet secretly after the shows, and they vowed to elope the very next night before the circus had to leave town.
However, Miss Aurora's father, the Ringmaster, heard of his daughter's plans and made the circus leave that very morning.
Miss Aurora's trusty horse escaped with a note tucked into his mane.
'Giddy up. Giddy up'
Aurora whispered in his ear before he set off.
But the journey was far and the horse became tired, and he knew it was his time to sleep in the heavens.
And as he closed his eyes he turned into a shimmering constellation of stars.
The young farm-hand saw the message in the sky and he found Aurora.
And very soon they were wed in a midnight ceremony illuminated by the circus horse up above.

Email ThisBlogThis!Share to TwitterShare to FacebookShare to Pinterest
Labels: Hope and Elvis, Once upon A Time