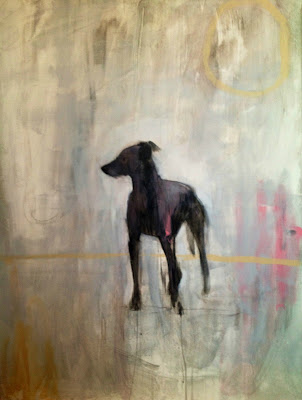 Every time I paint it's nearly always the same old story, I spend hours carefully painting something...and then I overwork it.
Then I have to get really mardi with myself and have a proper little artistic tantrum.
Now this when I wipe most of it away, if I'm not brave enough at this stage, the painting is doomed forever.
Now is cup of tea time.
Then I have 'fresh eyes' and (hopefully) start to see something, just a glimmer of hope, anything.
The thing is, for me, I have to be brave and take risks and know when to stop, even if it's for ten minutes.
Funny thing is, I learn this over and over again, every time I start a new painting!

This is a gorgeous image, rather lonely and yet welcoming....I love it!
5 months ago Beatrice responded:

Ahhh ...breath of fresh air.. your confession is like music to my ears.. you've given me confidence to carry on.. I am an artist at heart, dreamt of going to art college but times were tough back then, so sent on the secretarial trail.. many moons and many disasters later.. I tentatively begin, but fail in the same way as you describe.. overworking (mine because I'm not sure what I'm really doing).. so put it aside only to later see something there that had looked a mess before.. So, thank you.. I so understand and am encouraged to hear that REAL artists don't just do it right first time either..
Love your style.. your pictures are far better than I would aspire to ..

Thank you both for the lovely feedback.
Beatrice, how kind of you to take the time to write such an honest and touching response. Your comments just blew me away...I can't believe people actually read my ponderings!
Hope you are enjoying your painting, just keep going, drink lots of tea (not tea-coloured paint water though!) and just play.
Thank you both for commenting, it really is so encouraging when I hear from you, it makes my day chucks x

﻿This poor chap had (literally) been legless for weeks and he had been glaring at me every time I went into the studio.

﻿
So today, as I looked into his foxy eye, I surrendered.
'Okay Mr.Fox, you have my undivided attention, you shall go to the ball!'
You see, I had known from the very beginning that Mr.Fox's dream was to dance the Fandango, and I had already painted in the cummerbund of a rather fetching sky blue pair of lycra slacks.
I think that now, finally, he does cut a rather dashing figure on the dance floor.

﻿
When I first started this painting my mum and dad popped round for a visit and me dad said:
'Why has that fox got blue trousers on?'
Me and me mum turned around and replied incredulously in unison:
'Because he's dancing the fandango of course!'

﻿
The only thing is that now he has fully emerged a strange glint in his eye has appeared,(you generally find that with foxes,) and he seems to be more lounge room lothario than dance floor diva.
(I bet he'd woo you over a glass of something with an olive in it and run off with your car keys and life insurance.)
Anyway, he seems pleased with his new legs, and at this very moment is happily throwing shapes across the canvas.
I've got a thing for these little critters, I painted this skulky little character before 'Mr.Fox Dances the Fandango'. 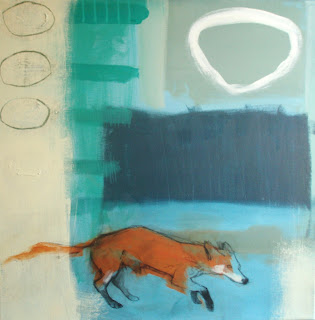 ﻿
This is a brilliant CD to listen to whilst painting foxes (that's handy to know isn't it), 'Picnic on the Edge' is my favourite track.

Today is the first chance I’ve had to get back in the studio for ages and did it feel good!
I didn’t have a fixed idea before I started painting (I never really do), but I gathered up a few photos and sketches and at first started to draw sparrows.
At this stage I really don’t care if the drawings work or not, as when you wipe over mistakes with a wet rag the ‘ghost drawings’ are left behind and an interesting surface is created.
I just can’t make ‘clean’ drawings, I like to see the ‘working out.’ (As my wonderful math’s teacher Mr. Thomas would always say, ‘it’s the working out that is the most important thing’…….which is rather handy really because I never got the answer right!)
The sparrow then evolved into a dog (of course), loosely based on ones that I’d been photographing & sketching when we were at Robin Hood’s Bay in the Easter hols. He was a fine specimen of a beast & was completely besotted by this smelly piece of seaweed (nice).

﻿I really toiled with this sketch & I felt so rusty but it was lovely just to get that ink tense pencil back in my hand.

﻿I was lost in that fuzzy bubble again, listening to the new ‘Bon Iver’ CD (thanks Ella,) & it felt great to be back.


Now I never normally do this, but as soon as the sketch was finished I drew the dog quickly onto a linen canvas that had been sulking in the corner (weeks ago I’d painted on some blocks of colour but it just wasn’t happening). I’ve never used a linen canvas before & at first I didn’t like the texture and it seemed to repel the acrylic paint a little. However, it seemed to love the ink tense pencils & because of the previous two hour sketch-a-thon that had taken place, this painting seemed to flow much easier.
I’ve literally just finished ‘Dog & Seaweed’ so I don’t even know if I’m happy with him yet & if he will ever face the outside world (who knows, he may change back into a sparrow by tea time!) But I loved painting him. 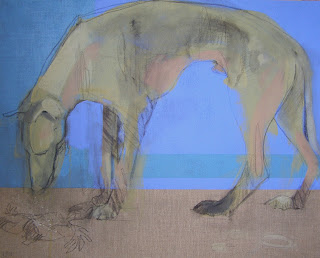 Oh! Studio, how I missed you!

I've been working on some sketches of Ashby High Street (the place where I grew up: learned to ride my bike, bought my first single from Woolies ('Don't You Want Me?' Human League) and bought my first eyeshadow ('Forest Green' Number 17).
Any road up, I digress (how unlike me) I'm working on stuff and trying out techniques for the next BTEC Unit we're teaching, which will be based on the urban environment.
So I spent a fab day with my mate Pat yesterday, chatting, eating, laughing, pondering, painting and talking about the big things in Life.
By the end of the day I had a full stomach, a sorted head, and these painted sketches:

﻿
I lightly wiped over the brown paper with linseed oil and drew using charcoal that had been soaking in a jar of linseed oil for a few days.
The prepared charcoal creates this beautiful velvety line that makes you go 'ppppprrrrrrr' and it doesn't smudge!
Then I applied acrylic using my finger. I was quite dubious about this because I thought that the water based paint would repel the oiled paper, but it seemed quite happy and didn't even sulk!
I love it when you break the rules and it works! (What an art rebel I am!)

﻿
PS: Friday night was the work's Christmas bash and we had the best time ever.
It was like the dream disco- the DJ played nearly every record we requested (AND in the order we'd written them on our rather extensive list!)
Let's just say that in the expressive world of 'movement to music' (did you used to do that in junior school? I guess you have to be in a certain demographic to remember that!) there's a fine line between throwing a few shapes on the dance floor and looking like a rabid guinea pig on speed - and that line, my friend, I well and truly crossed .
But who cares?
And as I merrily moshed away, I had a little epiphany (due to frenetic head banging methinks, but an epiphany none the less) and just for a second everything slowed down, and as I looked around I thought:
'I am having one of the best nights of my life
and
I have the best mates in the whole wide world.'
I am a very lucky girl indeed.

Just Me And Kate Chillin':

T'other night I had that niggling feeling, I'd been sensible for far too long, doing paper work and other such 'grown up' gubbins.
I had to get the paints out!
So I bunged me old mate Kate Bush on me trusty CD player (which also has a cassette player-love it!) at top volume and got cracking:

﻿
Yes, I do have to have everything lined up in nice straight lines when I'm working, what's wrong with that?
(That was rhetorically speaking you understand, no actual comments please!)
Ahem, moving on...
Now you may be wondering what the peculiar little book is all about.
Well, it was a nature book that I picked up from a second hand shop and sometimes I collage in it and use it like a 'picture diary' and sometimes I use it alongside a painting that I'm working on, to test out the paint mixes, mark-making and the such.
So sometimes you end up with a 'two for one'!
The words are taken from 'The Red Shoes' that Kate was so beautifully singing to me as I was painting away (it also seemed to suit the way that I was feeling at the time.)

﻿
I also tried out a technique to transfer text from magazines (it has to be a glossy one by the way.) 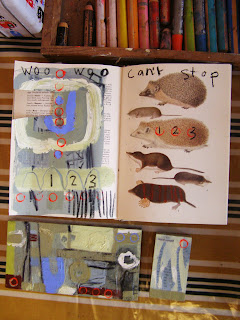 ﻿
If you press down the magazine paper onto the wet acrylic, let it dry, paint a different colour over the top and peel off the magazine pieces, then it should transfer. (The writing will print backwards of course, but it still creates an interesting surface.)
I was pleased with this little experiment but it isn't very reliable, sometimes it just doesn't work at all and then other times it seems to and then mysteriously disappears! (Great for spy-artists!)
However, the arty gods were with me on this occassion and so I used the technique on my painting as well.

﻿
Now I had planned to take step-by-step photos during this, (like I'm always telling my poor students to do) but once I get cracking that's it. So I only took two piccies, one right near the end and another the day after when I'd tweaked  it a bit more.
Pathetic!
(I blame that fuzzy bubble I get stuck in once the paint and the music starts flowing!)

﻿I think the layers of the black Stabilo Woody crayon unifies the composition, I don't think that the image was strong enough before and lacked a bit of 'ooomph'.

I enjoyed this painting so much and after my precious three hours of escapism I felt like a huge weight had been lifted.
I think that is what this little painting is about. That sometimes you just have to stop and do the thing that you love, to just have a bit of time to remember who you are.
(Sorry, that probably sounds like a load of old tosh!)