26/9/11: Drawing With My Trusty (And A Bit Rusty,) Sewing Machine:
﻿
Sometimes, when I feel that my drawing is becoming really tight and rather horrid I find that swapping techniques and media really helps. (I suppose it's the same as if you had fish fingers, chips and beans every single night for tea.)
This technique also helps in the pacification of my embroiling inner turmoil every time I see yet another piece of old linen languishing in the charity shop. 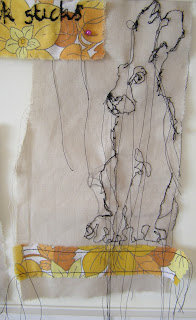 ﻿Firstly, just roughly sketch in pencil (I did use one of those disappearing ink type pens that you are supposed to use in embroidery but they disappear too quickly! Anyway, if the sketch goes wrong you can just use a rubber.)
I have now invested in a proper embroidery foot for my sewing machine (I think I can honestly say that she is the only machine that I truly adore. She was my thirteenth birthday present, and I remember at the time being slightly disappointed, I probably wanted a ra-ra skirt or something equally '80's related, but it has been one of the best presents I have ever been given.)
But anyway, I digress (quelle surprise) if you haven't got an embroidery foot it doesn't matter, just watch your fingers!
Switch the dial-thingy to 'embroidery' setting, attach the embroidery foot and you're ready to rock (that doesn't quite fit in with the embroidery image but who cares!)
I love free style machine embroidery because it's like making a continuous line drawing and I do think that the results are better if you don't stop and start with the stitching or try and be too neat. Just go with the flow.
Now, because I still can't alter the tension on a sewing machine (not that I studied fashion at college or anything, ahem!) I do find that the stitching is often really loopy at the back but I really like that and usually prefer the back of the picture. I also like the dangley threads so I don't tidy those up (sorry Miss Dixon!)
ooooooo aren't I the needlework rebel! 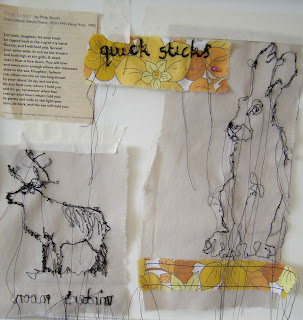 When I stitched this little hare picture it really helped while I was struggling with 'The Big Skies' painting.
After having a joyous play with my trusty sewing machine my drawing became much freer, and once again she saved not only the day, but yet another canvas being flung out of the window. 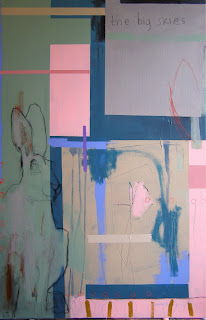 Just before our jolly jaunt I had a play with some dissolvable film that I had bought from Art Van Go.
Firstly I sketched a most striking lurcher that I had papped a little while ago. (This is a habit that is getting way out of control.) 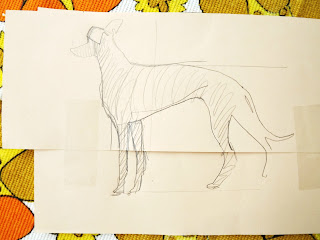 ﻿
Then I traced the outline onto the film using a permanent marker.
The only problem I had was stitiching onto the film, even when trapped in an embroidery hoop (but that could be down to my rather tetchy machine.)
It worked really well with a piece of paper behind it, (unfortunately, the paper is still trapped 'inside' the dog's body but luckily I quite like it.)
I really loved scribbling in the dog, you can quickly build up lovely areas of tone just using two or three colours of thread.


Then, the magic part!


Just plop it into a bowl of water and the film dissolves (I guess that's why it's called dissolvable film, but it's still pretty exciting!) 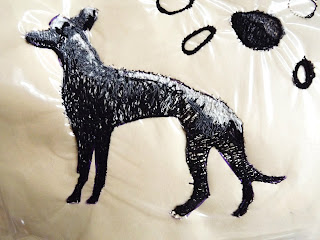 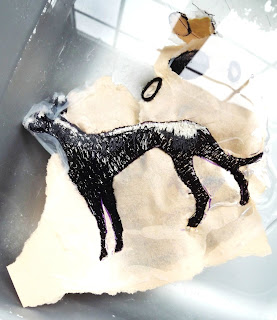 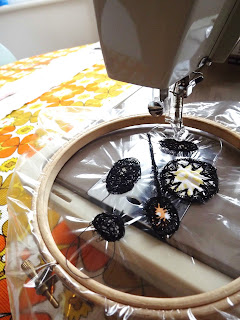 I'd scribbled some pebbles as well, to add later.
Then it was just a case of playing around with fabric scraps layout, (this is my favourite part of the process and it usually takes me many a happy hour until I'm happy with it! 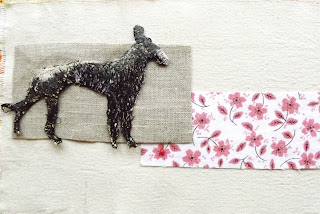 At this stage, a second opinion is always useful... 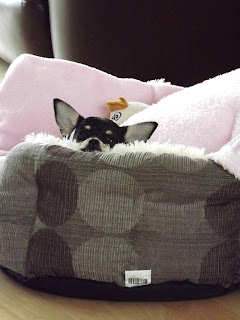 Oh! The joys of dingly danglies and buttons! 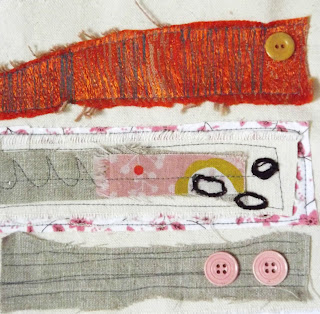 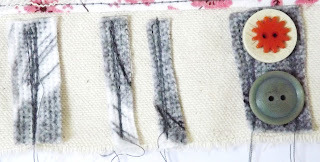 My other half kindly made me a wooden stretcher and I just stapled the canvas using a staple gun. 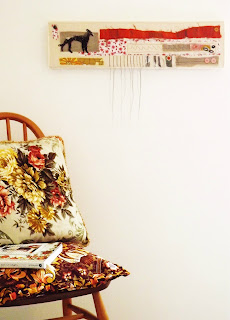 I really enjoyed making this and will try to practice a little more with the film, (which could soon become another of my strange addictions.)

A few months ago I enjoyed a fabric-tastic work shop at the 2021 Visual Arts Centre in Scunthorpe.
The artist Paola McClure had a solo exhibition (all the following pics of her work are scanned from the gallery's catalogue and postcards,) and the show was awe inspiring. 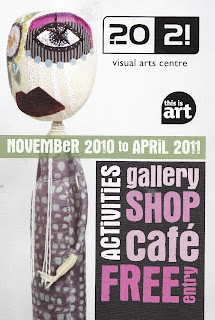 The fabrics and trimmimgs that Paola used (ooooo, don't get me going about haberdashery again!) made me go all unnecessary and the craftsmanship was incredible.
...'the root inspiration for me is always the fabric itself - not just because of its texture, colour and pattern but also because of its origins. As most of the fabric I use is second hand, it comes with a past attached. Each piece has its story to tell or its own secrets to keep.'
Paola McClure 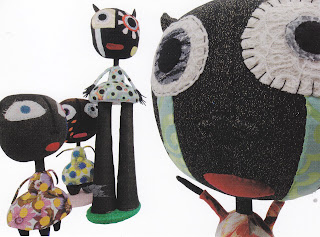 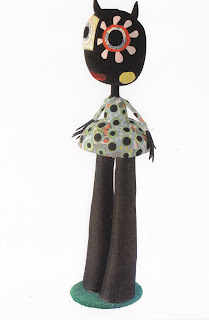 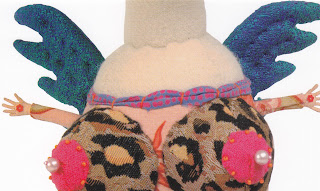 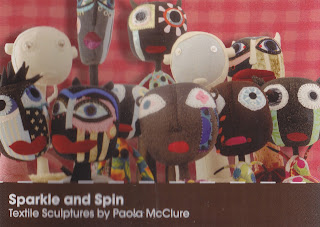 ﻿
Working with Paola McClure in the workshop was an honour indeed and I learn't so much it was unbelievable.
I think that this was one of the happiest days of my life, just chatting, stitching and rifling through fabric scraps (two bin bags stuffed full of lovlies.Woo! Hoo!)
And as the day progressed, Mrs.Wonkey Donkey emerged..... 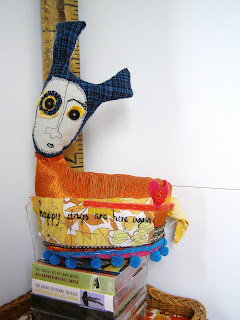 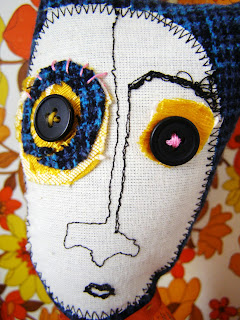 ﻿
This workshop combined my love of machine embroidery with 3D construction techniques (what you can do with rolled up bits of cardboard is nobody's business!) And pretty soon Paola had me making little legs out of tiny card rolls wrapped with lycra, and, after much a huffing and a puffing, I even managed to make a gusset, (now this word makes me cringe from the very core of my being, so from now on it shall forever be known as an 'usset', if that's okay with you). 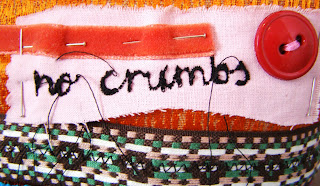 ﻿Now Mrs.Wonkey Donkey is a rather capricious creature, (in fact, in her youth she was formerly known as 'Lil' Miss Wonkey Donkey who likes to dance at the Honky Tonk-ey'), but she is now retired due to a rather sad case of frayer-itis.
As I mentioned earlier, I am most proud of her sparkly (but slighly wobbly) legs, yet rather surprisingly, (considering her past shinanigans,) Mrs.Wonkey Donkey was not at all keen to have her dainty ankles recorded for posterity.
Therefore, please accept my rather blurred photograph of said appendages, but it is a little tricky to focus when Mrs.W.D is kicking and screaming: 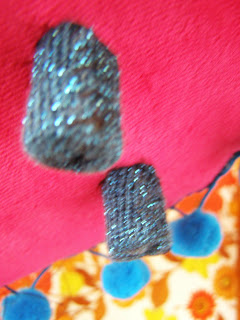 I have created a Diva of epic proportions.
Images of Paola McClure's work have been reproduced with kind permission from the artist.