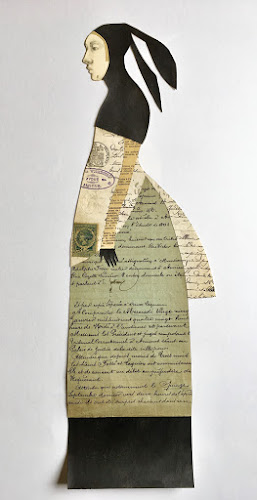 A little while ago I posted a photo of this piece of work in progress.
A lovely Instagram friend of mine called Diane wrote the most magical story about this girl.
I asked her if I could blog this story to share with you all.
Please make yourself a cup of tea, get yourself comfy, and enjoy...

So once there was a young girl who lived in the Breton countryside.
The place was quiet and the pace of life was slow.
Lapin was an only child and both her parents worked all day, retting, spinning, weaving and bleaching the linen.
When the linen was woven, it would be spread out on the fields and the sun would work its magic, and the cloth would bleach.
Lapin's parents were so tired that they would be late going to collect the linen spread out on the grass. It was Lapin's job to make sure that the rabbits didn't run across the cloth as they would mark it with their paws and droppings.
As Lapin had no other friends she would watch the rabbits and only gently shoo them away.
One evening when she came back from the fields with her mother and father, she pulled some of the beautiful creamy coloured linen over her head. Two corners flopped down over her back and when her mother looked an idea came into her head.
That night she stayed up very late, the night was warm, and as always quiet. She carefully cut out a shape and stitched away with some linen thread that she had spun. Eventually she went to bed delighted with what she'd made and so fell asleep with a satisfied smile on her face.
The following day, before Lapin went out to sit in the fields to watch over the cloth bleaching in the sun, her mother handed over a piece of folded linen. Lapin thought maybe it was some bread and cheese for her to eat. The folded piece is too light to hold anything... Lapin shakes the piece open and finds that her mother has made the most beautiful hood for her daughter to wear. 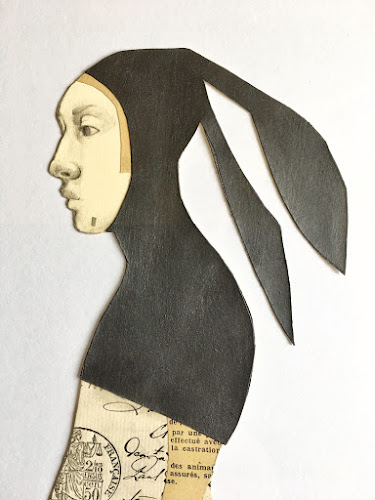 What is so special about the hood is that it has long ears hanging down from the crown. Lapin immediately pulled the hood over her head, there was an opening for her face and the hood fitted snugly down her neck.
She kissed her mother and then ran and ran and ran out to the fields. As she ran the beautiful gentle ears bounced up and down.
Later, as she crouched on her knees with her arms stretched out in front of her and her head resting on her knees she saw the rabbits coming to nibble the grass and play in the late sun.
Lapin was very happy.
No longer did she need to shoo the rabbits away as they came nearer and nearer to her.
Nowhere in those fields was there a happier little girl and such contented, calm rabbits.

Thank you so much Diane, it's such a beautiful story, I really think that the little community we have online is really special and supportive of each other.
X

Posted with Blogsy
Posted by Mrs Bertimus at 01:53