A Trip Down Fashion Memory Lane:

Many, many moons ago, before Mrs Bertimus was even a twinkle in my sewing box, a young northern lass packed up her chattels and ventured to London to study fashion.
She loved the whole fantasy of the fashion world and the hollow promises that Madame Fashion whispered in her ear.
After many adventures she waved goodbye to the big, bad city and pottled along a different path.
Any how...back to the present day, and a good friend of mine asked if I could paint a fashion- y type illustration as a Christmas present. 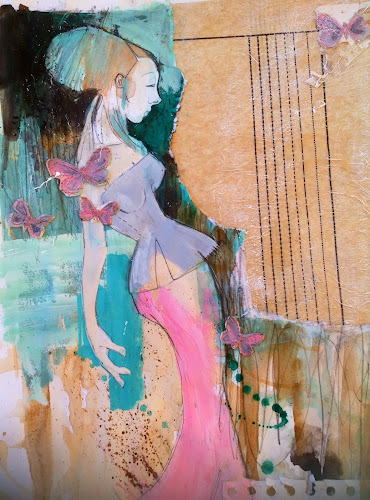 Well, I found many cobwebs in the fashion section of my little frazzled brain and my first attempt was truly dreadful. I think because I knew it was a present for someone, it turned out all stiff and unnatural,and was just too neat and tidy.
So last Saturday I gave it another go.
I tried not to think too much, splashed a load of paint on the paper before I even began, and had a slushy Christmas film on in the background.
Well, let me just tell you about the slushy film first of all.
It involved three little orphan boys who had to live with a childless couple who ran a toy factory, as the orphanage was being fixed up.
Need I say any more, apart from the last line of said film was:
'Boys, we're not adopting one of you this Christmas.
We're adopting all of you.'
(Honestly, I'm welling up again just writing this!)
So, there I was, cup of tea in one hand, paint brush in t'other and big, fat tears rolling down my face.
I had a whale of a time, and because I forgot that I was painting for someone else, I think that this attempt looks a little looser.
It's by no means perfect, and I'm sure that Madame Fashion would have many a criticism to send my way, but I really enjoyed painting it.
Hope it's a nice surprise on Christmas morning...

Posted with Blogsy
Posted by Mrs Bertimus at 02:37